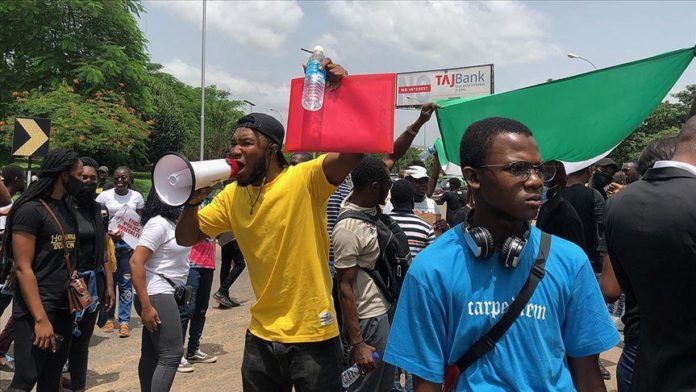 Conflicts and protests continued to haunt the African continent in 2020, besides the health and economic crises due to the outbreak of COVID-19.

Thousands of families across the continent were left penniless as breadwinners lost their jobs as a result of lockdowns imposed by countries to stem the spread of COVID-19.

South Africa – the continent’s most developed and industrialized economy — with the highest COVID-19 infections and deaths experienced the toughest lockdown. Millions of workers employed in non-essential services were not allowed to leave their homes for months.

The country has recorded 1,021,451 cumulative COVID-19 cases and 27,568 deaths the highest number on the continent, which makes it the 17th most affected country worldwide.

Dlamini, 52, died at a hospital in South Africa on Dec.14 after testing positive for the virus on Nov.16. The government of Eswatini said the premier had been receiving treatment for COVID-19 in South Africa.

Burundi’s President Pierre Nkurunziza 55, also reportedly succumbed to the pandemic in June, according to local media reports. But Burundi’s government said the cause of death was a heart attack. However, local media outlets claim the government has concealed the actual cause of the president’s death.

On May 15, the government expelled representatives of the World Health Organization (WHO) from the country, accusing them of manipulating the outbreak.

The pandemic has also claimed several lawmakers in the continent including Mali’s opposition leader Soumaila Cisse, 71, who died last week.

Cisse was a leading opposition figure in Mali having contested thrice for the presidency and also served as finance minister.

Organizers of the protest that came to be known as #EndSARS movement said the Special Anti-Robbery Squad (SARS) of the police in existence for nearly three decades had abused its powers for far too long.

Protests first erupted after a video of a man went viral allegedly being killed by the police unit sparking the #EndSARS movement.

Police opened fire on the peaceful protestors killing dozens. Global celebrities such as music stars Beyoncé, Rihanna, and Nick Minaj among others expressed support for the protestors.

After nearly two weeks of protests, the Nigerian government said a special presidential directive had ordered immediate disbanding of the SARS.

Commentators, however, say the Nigerian government should have overhauled the entire police force.

A three-week-long war erupted in early November between the Ethiopian National Defense Forces and the Tigray People’s Liberation Front (TPLF), who were ruling the northernmost region bordering Eritrea.

On Nov. 4 the TPLF a former separatist movement attacked the Northern Command of the Ethiopian National Defense Force in the Tigray Region sparking a conflict.

Two days after the attack, Ethiopia’s Prime Minister Abiy Ahmed ordered the launch of an airstrike on several locations in the Tigray region. The number of Ethiopian refugees who crossed into Sudan fleeing the restive Tigray region has reached 55,000 people, according to the UN.

Sudan closed its borders with Ethiopia and the UN called for the immediate de-escalation of tensions and peaceful resolution to the conflict. The conflict ended on Nov. 28 when Abiy declared victory.

Suicide bombings by Somalia’s al-Qaida-linked al-Shabab extremist group continued to claim lives and wreak havoc in the horn of Africa country. Barely a month goes by without the terror outfit denoting devices in cities across the country or using suicide bombers to attack hotels, popular cafes, or roadsides.

On Nov.27, a huge blast in the capital Mogadishu killed at least seven people, hours after US Acting Secretary of Defense Christopher Miller visited the country.

This month, at least 10 people lost their lives in the semi-autonomous state of Galmudug after a suicide bomber detonated a device at a rally due to be addressed by the country’s prime minister Mohamed Hussein Roble.

Meanwhile, in Mozambique, an armed militant group, believed to be affiliated to the Daesh/ISIS terrorist organization, continues to wreak havoc in the northern part of the country killing hundreds, displacing communities, and capturing towns.

The group is locally known as al-Shabaab, but with no established links to the armed militant group in Somalia, wants to establish an Islamic caliphate in northern Mozambique where it has exploited people’s desperation of poverty and unemployment to recruit in large numbers. It has been active in the area since late 2017.

In November the group reportedly decapitated more than 50 people in the northern Cabo Delgado province of Mozambique, according to local media reports which said the militants turned a football pitch into an execution ground.

This week, a UN report warned that the crisis in northern Mozambique has caused mass insecurity and violence leading to an estimated 1.3 million people in need of humanitarian aid and protection in the coming year.

Despite the global health pandemic, some countries went ahead to hold elections. On Dec.7 Ghanaians went to the polls to elect a new president and lawmakers. Incumbent President Nana Akufo-Addo was declared the winner with 51.59% defeating former President John Mahama.

Last month Burkina Faso’s incumbent President Roch Marc Christian Kabore was re-elected after garnering 57.8% of the vote giving him another five years to lead the West African nation. His opponents, however, said the polls were not free and fair.

In May, Burundi, a country located in East Africa held elections that saw Evariste Ndayishimiye 52, a retired army general and member of the late President Pierre Nkuruzinza’s ruling party winning the polls with nearly 70% votes.

The situation in the Central African Republic continued to remain extremely tense since the candidacy of former President Francois Bozize for the Dec. 27 elections was rejected by the Constitutional Council. Several militia groups, some close to Bozize, have recently launched attacks.

The West and Central Africa region is beset with some of the world’s most acute and prolonged crises. Extreme poverty, rapid population growth, climate change, chronic food insecurity, and malnutrition continue to drive extreme levels of vulnerability.

The COVID-19 pandemic, related prevention measures, and socioeconomic consequences deeply affected fragile communities. Conflict in the region’s hotspots persists or has worsened, according to the UN.

Violence, flooding, and displacement have pushed at least a million children in South Sudan to the brink of starvation, Save the Children, said a leading humanitarian organization for children.

In October, a separatist group stormed a school in Cameroon and killed several children and injured others.

Following the massacre, several opinion leaders took to social media with the hashtag #EndAnglophoneCrisis to denounce the attacks and urge the government and secessionists to resolve the crisis, which has affected hundreds of thousands.

UN Secretary-General Antonio Guterres expressed “shock by horrific attack” on a school in Cameroon’s city of Kumba. He urged the Cameroon government and separatists to settle the ongoing crisis that according to Human Rights Watch has claimed over 3,000 lives since 2016.

On July 1, 2020, the World Bank announced that the Tanzanian economy had been upgraded from low to lower-middle-income status.

Reflecting strong income growth over the past decade, the World Bank announced that Tanzania’s gross national income (GNI) per capita increased from $1,020 in 2018 to $1,080 in 2019, exceeding the threshold for lower-middle-income status.

The country’s broad vision of its development goals as a middle-income country in 2025 are set out in the Tanzania Development Vision 2025, characterized by high-quality livelihoods; peace, stability, and unity; good governance; a well-educated and learning society; and a competitive economy capable of sustainable growth and shared benefits, according to the World Bank.