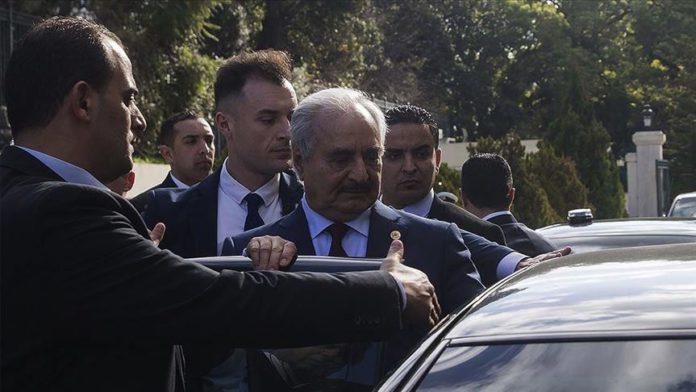 Libyan analyst Mohamed Buisier predicts that eastern warlord Khalifa Haftar will be defeated by the Libyan army by the end of this year.

“Haftar’s campaign is coming to an end,” Buisier told Anadolu Agency in an interview. “The warlord will be absent from the scene by the end of this year and maybe even before that.”

The internationally recognized Libyan government has been under attack by Haftar’s militias since April 2019, with more than 1,000 killed in the violence.

The Libyan army, however, has made significant gains against Haftar’s forces in recent weeks, recapturing Al-Watiya Airbase south of Tripoli from putschist forces.

Buisier said Haftar has engaged in conflicts with major tribes in eastern Libya.

“Tribes of eastern Libya have begun to abandon Haftar after they realized that his path is a dead end,” he said, citing a recent complaint against Haftar by the Awaqir tribe, the second- largest tribe in eastern Libya, to Aguila Saleh, the speaker of the Tobruk-based parliament.

“This is the start of a rebellion against Haftar,” the analyst said. “People want to get shares of the political prize. However, they distance themselves from the defeated.”

Buisier said the US now sees Haftar as a threat to its national interests.

“With the increasing Russian presence in Libya, we notice that the Americans now consider Haftar as a threat to their strategic interests,” he said.

He said Libya’s independence in 1951 was welcomed by the US and UK “as it blocked the way to any Soviet military presence”.

“[Any Russian presence in Libya] is a threat to southern Europe, particularly Greece, Italy and France, which can’t be accepted by the Americans,” he said.

He said Haftar’s attacks on civilians and diplomatic missions in Libya have also irked the Americans.

“These attacks have made the Americans see Haftar as a war criminal,” he said.

Buisier said the Americans now see the Turkish support to the internationally recognized Libyan government matching with their strategic vision in the region.

“The steadfastness of the Libyan youth and Haftar’s failure to use the French, Russian, Emirati, Egyptian and Saudi support to capture Tripoli have caused to change the American position,” he said.

He said NATO was founded and funded by the US.

“The Turkish contribution in the alliance is vital and no other member, like Greece, has the same weight and influence inside the organization,” he said.

The analyst pointed out to a statement by US Secretary of Defense Mark Esper in which he described Turkey as “the most important ally within NATO”.

Buisier said the Americans were disturbed by French efforts to establish a European force independent from NATO.

“This is because the Americans are the ones who maintain Europe’s security and stability,” he said.

He noted that one of NATO’s missions is to stop any Russian military expansion.

The Libyan analyst said the Americans are piling pressure on the United Arab Emirates (UAE) to halt their support to Haftar.

“Macron can’t get the parliament’s approval on the plan because IRIN is not a national project and will not be accepted by parliament or the French people, so he is trying to get European and UN cover for the plan,” he added.

“No single ship or plane can disturb the Turkish fleet,” he said. “We can say that IRIN operation was born dead.”