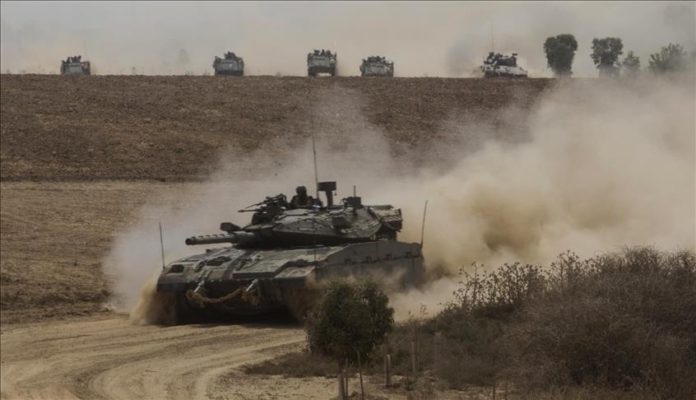 Saad Wahidi still remembers the day in 2008 he was trying to rescue his family from Israeli fires by moving them to his uncle’s home, where he believed it would be safer.

“The distance between the two houses is passed in two minutes, but at the time, it felt like a year,” he told Anadolu Agency.

Wahidi recalled the first time he saw the white phosphorus, fired by Israeli artillery, descending from the sky around him and his family amid the clashes that came to be known as the 2008 Israeli war on the Gaza Strip.

“It was very strange, like a small date of a fire that can never be put out, even by water. The fire was increasing,” he said.

For Wahidi, the worst part of the war was when his family was separated amid Israeli ground invasion of the Hamas-run Gaza Strip, storming the region from multiple points.

“Then, we lived without electricity and heating. The army arrested all the men under 40 years old in those cold days and the fire was everywhere around us. Those were unforgettable days,” he said.

Wahidi remembered those days, comparing them with later wars that took place in Gaza and how resistance groups improved their methods against the Israeli troops.

“In the war of 2008, dozens of rockets were fired. But in the later wars, hundreds were launched on each rocket burst, and this improvement is the only thing that helped us forget the horrible days we lived,” he said.

On Dec. 27, 2008, Israel carried out a large onslaught on Gaza over three weeks, named by Israel as “Operation Cast Lead” during which 1,436 Palestinians, including 410 children and 104 women, were killed. In response to the Israeli onslaught, 13 Israelis were killed in the Palestinian attacks.

Coming after two years of an Israeli blockade on Gaza to put pressure on Hamas after it won the legislative elections in 2006, the 2008 Gaza war was followed by several large-scale attacks by Tel Aviv on the sea-side enclave.

ِAccording to Afifah, the Israeli army deliberately strategized to use shock, terror, surprise, and fire to undermine the region’s will to resist, as well as to pressure it to adopt a political situation that was favorable to Israel.

“Israel wanted to downsize the force of Hamas, and there was a regional support for it but the effects of that war led to surge in the force of the resistance, not only military, but politically, as well, in the region,” he added.

Afifah emphasized that the 2008 war was the origin of all subsequent developments that affected the political and armed strength of Hamas, as well as its relations with countries that have played critical roles to support the Palestinians, like Iran, Qatar, and Turkiye.

“Today, as a major faction on the military resistance, Hamas is attacking the enemy, not receiving the attacks. This is one of the most important transformations of the balance of power,” he argued.

“The war of 2008 has many accumulated outcomes on the Palestinian street and the confidence of the Palestinian Authority that can’t stop Israel from imposing any measure against them,” he said, referring to recent expulsions in occupied East Jerusalem as an example.

“After all the years that passed, today, we can note the uprising as when Hamas became a critical player that cannot be ignored, despite the war aimed at undermining its strength.

Qatar to resume trade with Saudi Arabia on Feb. 14