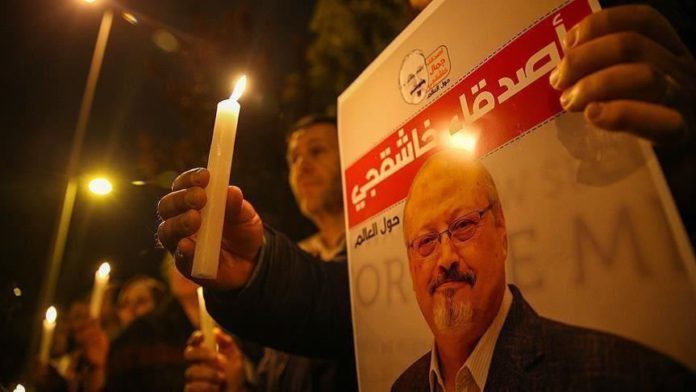 Two years on, the main figures accused in the 2018 murder of Saudi journalist Jamal Khashoggi in Istanbul have not been held accountable, but this cannot go on forever.

Friday marks the two-year anniversary of the murder of Khashoggi, who was killed in the Saudi Consulate in Istanbul. His body has never been found, with reports suggesting it was dismembered.

Activists and human rights groups have said the murder was premeditated and carried out upon directives of Saudi Crown Prince Mohammed bin Salman, a charge Riyadh denies.

In September, the Saudi chief prosecutor announced the final verdicts for eight defendants tried in the Khashoggi case. Five of the defendants were sentenced to 20 years, one to 10 years and the two remaining to seven years each in prison.

Justice was denied by the failure to disclose the identities of the defendants or who got which sentence, strengthening allegations that the trial was merely a coverup.

Speaking to Anadolu Agency, Ahmed Mefreh, a human rights lawyer and the executive director of the Geneva-based Committee for Justice, said that Khashoggi’s murder “turned from the murder of a journalist into an issue of international public opinion, so it will not be buried or set aside.”

“The case is a crime committed by a political system ruling an Arab country, which uses its powers to commit brutal murders against its opponents.”

He added that “the case file will not be buried, simply because he was not buried.”

He pointed out that “the case will remain alive because those responsible for his killing are still free. They have not been punished.”

He was referring to Saudi Crown Prince bin Salman.

He went on to say the judicial procedure of Khashoggi’s case “lacks the slightest degree of independence, transparency and professionalism.”

“Khashoggi’s case does not belong to his family only, and they are not the ones concerned with acquitting the perpetrators or issuing conviction,” he said referring to the pardon announced by his son, Salah in a tweet.

“This falls under the ambit of organized crime committed by a political system in another sovereign country,” he added.

Alaa Abdel-Monsef, a lawyer and head of the London-based Salam International Organization for the Protection of Human Rights, said: “The circumstances of the secret trial [in Riyadh] indicate that the whole matter is political set up to show that Saudi Arabia has applied the law and tried criminals.”

He asserted that “the main factor affecting the case is the blatant interference of the Saudi authorities in the trial, as members of the royal family were nominated.”

Abdel-Monsef said: “Had it not been for international pressure, the United Nations, and the transparency of the Turkish institutions and the media and the international community, the case would have been completely buried.”

It is noteworthy here that the United Nations Special Rapporteur on extrajudicial executions, Agnes Callamard, has always followed up the case since the crime occurred in Istanbul.

In March 2020, the Turkish Public Prosecution issued an indictment against 18 suspects in the case, and about four months later, the first session of the Turkish judiciary began to try them in absentia.

Abdel-Monsef also accused some Western agencies without naming them of “deliberately turning a blind eye” to perpetrators of the crime because of vested interests in Saudi Arabia.

In a 101-page report published by the United Nations High Commissioner for Human Rights in the summer of 2019, Saudi Arabia was held responsible for “deliberately” killing Khashoggi, noting that there is documented evidence for the investigation of senior officials, including bin Salman.