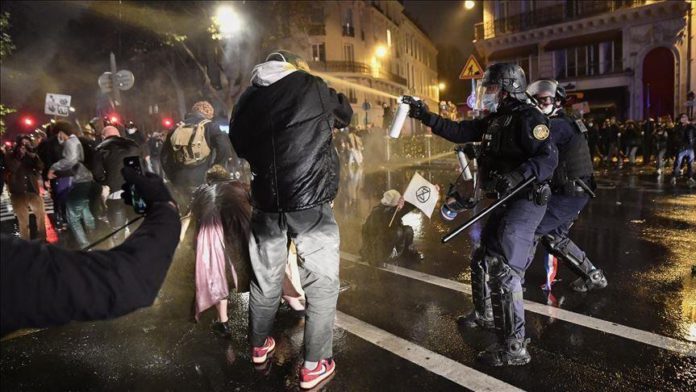 Blasting the move, producer Michel Zecler told broadcaster BFMTV: “Unfortunately, there is little doubt about the place where I would have spent these end-of-year celebrations, in the absence of a video to exonerate me.”

He added that he found it “difficult to understand” why the state is treating the police officers with such “benevolence.”

Of the four officers indicted since Nov. 30, two had requested conditional release, and the investigating judges granted this on strict judicial supervision and with a €5,000 ($6,082) deposit, local media reported.

They are also prohibited from performing policing duties, having a weapon, contacting the victim, or visiting the Paris district where the producer’s music studio is located.

CCTV video of the Nov. 21 incident showing police violently assaulting Zecler as he was about to enter a recording studio sparked widespread condemnation and outrage.

The video showed at least three policemen landing blows with batons and punching and kicking him repeatedly, reportedly for his failure to wear a mask.

Reporting the incident to their superiors, the police officers accused Zecler of being “dangerous” and acing violently.

In subsequent video testimony about the incident, Zecler had a swollen face and signs of bloody wounds, and said the police called him “dirty negro” several times when they were beating him.

Interior Minister Gerald Darmanin ordered immediate suspension of the officers, and President Emmanuel Macron described the video as “shameful” and “unacceptable.” Several politicians, celebrities and athletes had expressed anger and condemned the attack.

The incident prodded the government to revise a proposed security bill that would restrict the public display of images and videos of police personnel, allowing cases of excessive use of force to go unpunished.