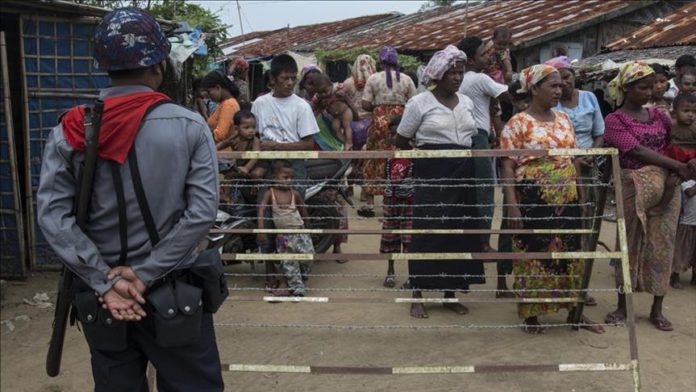 Two soldiers who defected from the Myanmar army confessed they were instructed to shoot Muslim Rohingya on sight and bury the bodies in mass graves.

The confessions made on video will have a “major impact” on the International Criminal Court investigation into barbarous acts by the army against defenseless Rohingya, said Canada’s UN Ambassador Bob Rae, Tuesday.

“This is about what the two individuals know,” he said.

“Shoot all you see and all you hear … exterminate all Kalar,” the Myanmar commander of the military operations center ordered when attacking Rohingya, claimed privates Myo Win Tun, who deserted the army along with Zaw Naing Tun. Kalar is a disparaging name for the Rohingya.

They are thought to be the first Myanmar soldiers to confess that the army committed atrocities.

Myo Win Tun said during one operation “eight women, seven children and 15 men and elderly” were murdered and their bodies were dumped into a hole and buried. The women were raped before they were killed, he testified on a video released by Fortify Rights, a human rights organization.

Earlier this month, Canada and the Netherlands declared their intention to support The Gambia’s motion to hold Myanmar responsible at the International Court of Justice for instigating atrocities.

In 2019, the court agreed to consider hearing the case that claims Myanmar committed genocide against the Rohingya.

Rae, who was appointed by Canadian Prime Minister Justin Trudeau as a special envoy to the Rohingya, said he visited the area and saw evidence of atrocious crimes.

UN and human rights groups have also documented evidence that Muslim villagers were raped and murdered and villages burnt to the ground.

In 2017, when attacks began, about 700,000 Rohingya whose only crime was that they were a Muslim minority in the predominately Buddhist nation of Myanmar, fled the violence to Bangladesh.

They live in an appalling environment in makeshift shelters with unsanitary conditions.

Human Rights Watch said the number now stands at almost 1 million and some have been killed by Bangladeshi security forces, while 600,000 remain in Myanmar’s Rakhine State where the violence continues.