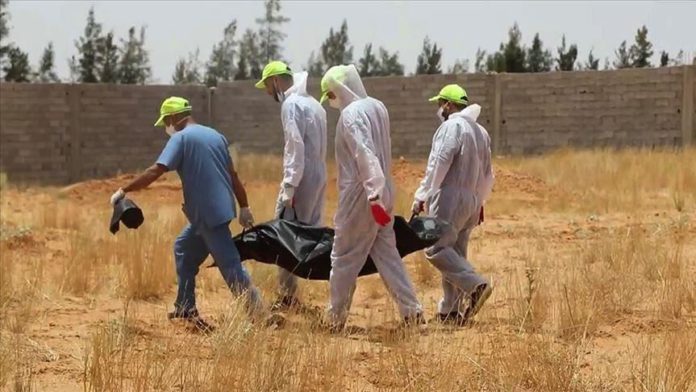 Two new mass graves were found in the southern Libyan city of Tarhouna, an official said on Thursday.

Libya Alahrar TV channel quoted an official of the Public Authority for Search and Identification of Missing Persons, Abdulaziz al-Jaafari, as saying: “Two new mass graves were discovered in the linking project in Tarhouna, south of Tripoli.”

“Investigations are now underway on the exhumation of corpses by the competent teams and the numbers will be announced upon completion of the investigations,” al-Jaafari said.

On Oct. 27, the Libyan Government of National Accord discovered four graves, including two mass graves, and exhumed 12 unidentified bodies in the city of Tarhouna.

According to Libyan official sources, Haftar’s forces and affiliated militia committed war crimes and acts of genocide in the period between April 2019 and June 2020.

On June 16, the Libyan government found 226 bodies in mass graves in Tarhouna and south of Tripoli.

Libya’s GNA was founded in 2015 under a UN-led agreement, but efforts for a long-term political settlement have failed due to a military offensive by forces loyal to warlord Khalifa Haftar.

The UN recognizes Fayez al-Sarraj’s government as the country’s legitimate authority, but efforts for a long-term political settlement have failed due to a military offensive by forces loyal to warlord Khalifa Haftar.