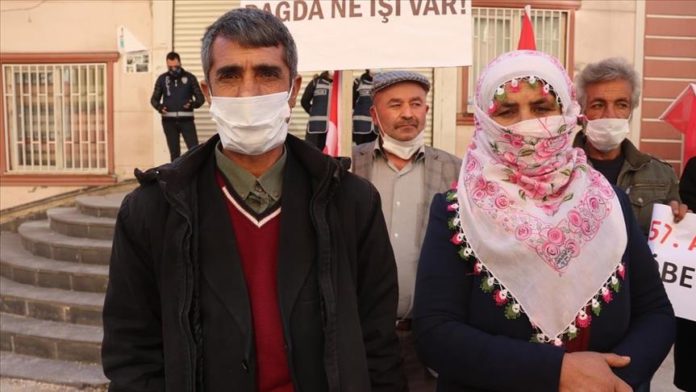 The sit-in protest in southeastern Diyarbakir province in Turkiye continues to grow with the participation of new families demanding the return of their children forcibly recruited or abducted by the terror group PKK.

Since Sept. 3, 2019, families have camped for 885 days outside the Diyarbakir offices of the Peoples’ Democratic Party (HDP), a party, the Turkish government said has links to the PKK.

Demonstrations have since spread to other provinces, including Van, Mus, Sirnak, and Hakkari.

Ali and Kevser Uygac joined the protest for their daughter, Rozerin, who was abducted by the terror group eight years ago when she was only 11.

Ayhan Karakaya, for his part, has joined the sit-in for his sister, Guluzar; she was tricked into joining the terror group at the age of 26 in Mus province of eastern Turkiye.

“I want my daughter. Come, my daughter, surrender to the state. I will not leave till you are back,” said father Uygac.

Karakaya said the HDP tricked his sister, who was abducted to the mountains, to join the terror group’s ranks.

In its more than 35-year terror campaign against Turkiye, the PKK – listed as a terrorist organization by Turkiye, the US, and EU – has been responsible for the deaths of more than 40,000 people, including women, children and infants.

State prosecutors have filed a case with Turkiye’s top court to close the HDP due to its reported terrorism ties.

Turkey to continue exploration in East Med until Nov. 4