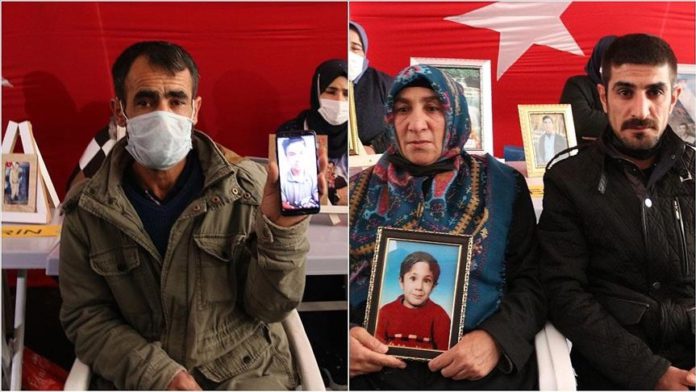 Two more families on Thursday joined the ongoing sit-in protest in southeastern Diyarbakir province of Turkey, demanding the return of their children abducted by the PKK terror group.

The protest began on Sept. 3, 2019, in Diyarbakir, when three mothers said their children had been forcibly recruited by the YPG/PKK terrorists.

Ziver Celik, a father from the southeastern Siirt province, joined the protest for his son, Ferhat, who was abducted three months ago at age 17.

Speaking to reporters at the protest camp, Celik said his son was working at a construction site in Istanbul. “One day, he went to visit his friends, but never came back,” he added.

“Ferhat, my son, please come back if you hear me. This is an empty path. Our government, police, soldiers, officials, and our president are all backing us. You will see no harm. I cannot bear this [pain] anymore,” Celik said with tears rolling down his cheeks.

Saying his son was deceived, Celik addressed the HDP and terrorist PKK, saying: “Keep your hands away from my son. I will resist your agenda, and there is no turning back for me at this point… Please send my son back. We just want our children back.”

Nadire Cakan, a mother whose son, Muhammed, was abducted by the PKK eight years ago at age 13, also joined the protest from the Yuksekova district of southeastern Hakkari.

Cakan, who joined the sit-in along with her elder son Kerem Cakan, spoke in Kurdish, saying: “After my son left, his father died because he couldn’t bear the pain. We are in pain. Please come back son, your father has died. We are all alone.”

Muhammed’s elder brother Kerem vowed to continue their protest until his brother returns, saying: “My brother was abducted while he was still in primary school.”

“These terrorists [PKK] are deceiving young children. All of the victim families should come here to protest. Our government is here, dear brother please come. That is not your path, your path is here with our government,” he added.

In its more than 30-year terror campaign against Turkey, the PKK — listed as a terrorist organization by Turkey, the US, and the EU — has been responsible for the deaths of some 40,000 people, including women, children and infants.

EU’s stance on Cyprus ‘blows up’ chance of cooperation