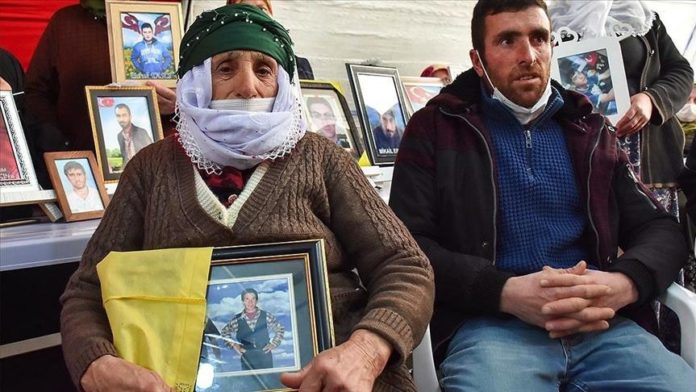 Families of children abducted or forcibly recruited by the PKK terror group have been protesting for more than a year in the Diyarbakir province, calling on their children to lay down arms and surrender to authorities.

The protest began on Sept. 3, 2019, when three mothers said their children had been forcibly recruited by PKK terrorists. The sit-in outside the office of the Peoples’ Democratic Party (HDP), which the government accuses of having links to the PKK, has been growing since then.

Aslihan Bugan, a mother from the northeastern Kars province, joined the protest for her son Mahmut, who was kidnapped by the terror group rather a long time ago.

Joining the protest with his younger son Turan, the 65-year-old mother said she had raised her sons in poverty. She was speaking in Kurdish.

“The PKK took him and never gave him back. I took to the road like an old woman. May Allah not leave them unpunished,” she lamented.

Besides his mother, Turan said his older brother was taken from Istanbul to the mountains, and they have never heard from him for the last 22 years.

The family decided to join the Diyarbakir protest when they watched it on TV, with the hope to unite with Mahmut.

Separately, Sahin Salim traveled from the southeastern Hakkari province to join the sit-in protest. He is waiting to meet his older brother Nurullah Salim, who was also kidnapped by PKK terrorists seven years ago.

Sahin said his brother was a 14-year-old high school student when he was kidnapped.

“The HDP took my brother. It should bring him back as it took him,” he said.

Salim also called on his brother to surrender to the security forces.

In its more than 30-year terror campaign against Turkey, the PKK — listed as a terrorist organization by Turkey, the US, and the EU — has been responsible for the deaths of 40,000 people including women, children, and infants.

China warns US of 'reciprocal measures' against media

China says manufacturing back on track despite COVID-19