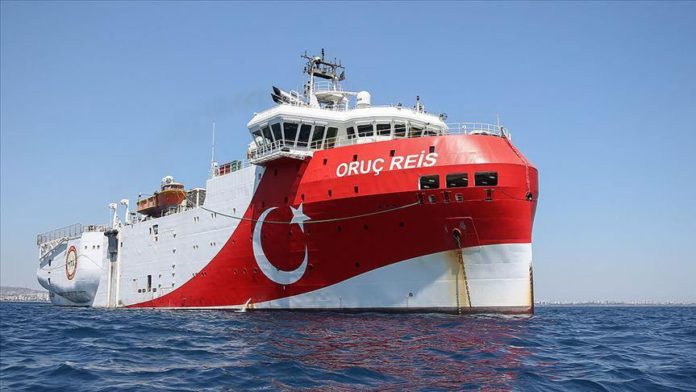 Speaking at the 26th International Energy and Environment Digital Conference and Fair (ICCI 2020) through video link, Donmez said the vessel reached its designated area of operation where it began to install the 10-kilometer-long seismic cables at sea for the first phase in its 10-day working schedule.

“The tests began yesterday and today we will receive the first seismic data,” Donmez said.

The Oruc Reis vessel set sail early Monday after the country issued a 10-day Navtex alert for the Eastern Mediterranean. The vessel is capable of conducting geological, geophysical, hydrographic, and oceanographic surveys.

The vessel also stands as one of the world’s top research ships and is equipped to hold two-dimensional seismic operations at depths of up to 15,000 meters (50,000 feet) and two- and three-dimensional seismic, gravity, and magnetic geophysical research.

“The ship will reach the Filyos port at the end of November and here we will reassemble the towers and do other maintenance work. Hopefully, then, the ship will work with the Fatih drillship in the Black Sea,” he said.

Included in Turkey’s fleet this year, Kanuni’s first operations in the Black Sea are projected to start in the first months of next year. Samsung built the drilling ship in South Korea in 2012. The ship’s drilling capability can extend down to depths of 11,400 meters and drill to depths of 3,000 meters. Brazilian energy company Petrobras used the drilling ship for exploration up to 2015.

Incentives to be given to renewable technology developers

Turning to the topic of renewable energy, Donmez also stressed its growing importance especially in the aftermath of the COVID-19 pandemic.

He explained that Turkey ranks ninth in the world and third in Europe in terms of renewable energy capacity, and increased following the adoption of the National Energy and Mining Policy in July 2017. This policy aims at becoming more self-sufficient, promoting renewables and ramping up local resource utilization.

He also stressed the share of domestic resources in power production has consistently remained at more than 50% every month since December 2018.

According to Donmez, Turkey ranked second in Europe in terms of the quantity of electricity produced from renewable sources last year. And during the first nine months of 2020, the share of power production from local and renewable resources increased to 62%.

Although these numbers reflect the progress made in renewable energy, Donmez said Turkey is looking at renewables from a more comprehensive window so that resources and technology can be developed simultaneously to become truly energy independent.

“No country can speak about energy independence when the technology belongs to others,” he said.

To achieve this and for Turkey to become a clean energy center in its region, it is aiming for renewable technologies to become a key export item through the provision of incentives to technology developers.