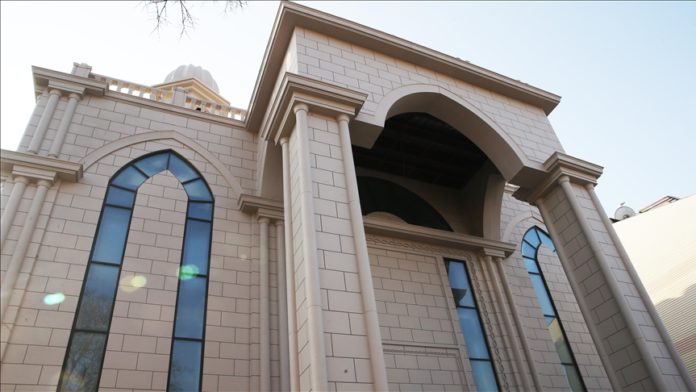 The construction of the first church in Turkiye’s republican era has been nearly completed, with around 80% finished, and it is expected to open this summer, according to officials.

In a 2019 ceremony attended by Turkish President Recep Tayyip Erdogan, the foundation was laid for the Syriac Orthodox St. Ephrem (Mor Efrem) Church in Yesilkoy, Istanbul on the European side of the metropolis.

The bell tower of the church, which was built on 700 square meters (7,535 square feet) alongside the Latin Catholic Cemetery, was inspired by historic monasteries in Mardin, southeastern Turkiye.

One story of the five-story church was reserved as a cultural hall for the community to meet after mass or ceremonies such as baptisms, funerals, and weddings, as well as meetings and conferences. On the ground floor are the bishop’s quarters, guest rooms, and parking lot.

Doors, windowsills to be decorated with wood carvings

Marble material was used for the walls and floors of the church, which has an interior ceiling height of about 10 meters (33 feet). Wood carvings will decorate the building’s doors and windowsills.

The building, which is planned to be opened this August or September as the second Syriac church in Istanbul, aims to serve some 17,000 Syriacs living in the city.

Sait Susin, head of the Istanbul-based Syriac Church Foundation, said that members of the Syriac community who came to Istanbul after the 1950s prayed in a church in Tarlabasi in Istanbul’s teeming Beyoglu district. But it was not enough, he said, adding that the community also used six sister churches belonging to other communities.

Noting that they could not fit into the church in Tarlabasi, Susin said that their rituals did not fit other churches and that they need a new church.

Saying that a church is needed especially in areas where Istanbul’s Syriac community is densely populated, such as Yesilkoy, Bakirkoy, and Florya, Susin added that they spoke to official institutions to allocate land for the community so they could build a church.

“10 years ago, then-Prime Minister and current President Recep Tayyip Erdogan also worked on the land allocation,” he said. “The president instructed the late Kadir Topbas, who was then Istanbul mayor, to find a spot. Lengthy studies were carried out, but a suitable place wasn’t found.”

Noting that they later decided to build the church alongside the Latin Catholic Cemetery, Susin explained that this area was once given as a cemetery to Catholics but there have been no burials there since 1996.

Susin explained that now they are working on the church interior.

As this is the first time a church has been built in Turkiye’s republican era – nearly 100 years – Susin thanked the Turkish government for “responding to this request with sensitivity.”

Although overwhelmingly Muslim, Turkiye has sizeable Christian, Jewish, and other minority religious communities, and a long tradition of peaceful, multi-faith coexistence.

Erdogan’s determination was pivotal in the new church becoming a reality, said Susin, explaining: “Because it’s not enough to say ‘do it,’ there can be serious problems at the lower level, in the bureaucracy.”

“But thanks to the will of the president, we got to this point. Of course, the president not only caused the allocation of this place but also stayed with us at the groundbreaking ceremony with a great gesture and generosity,” he added.

“We hope and wish that he’ll stay with us after the opening as well,” he said. “We would like to express our endless gratitude to everyone who contributed, especially to President Recep Tayyip Erdogan, who gave permission and helped us.”

Susin also said that the architecture of the church was inspired by modern architecture as well as the Syriac church and monasteries in Mardin, southeastern Turkiye. He said that the construction will be completed after the completion of remaining detailed work.