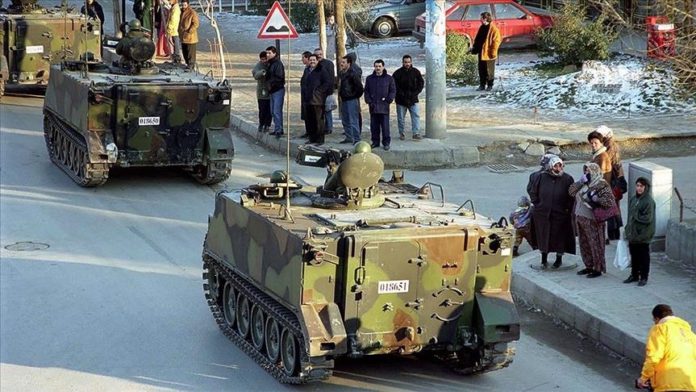 In February 1997, the military ended the administration of Prime Minister Necmettin Erbakan amid concerns by generals about its alleged “Islamist” program.

According to many assessments, the coup paved the way for the 2001 financial crisis and caused a cost of hundreds of billions of US dollars on the country’s economy.

In 2001, a stormy disagreement over supervision of the Turkish banking system between then-Prime Minister Bulent Ecevit and former President Ahmet Necdet Sezer caused the biggest financial crisis in the country’s history.

The Istanbul Borsa Stock Exchange collapsed, interest rates jumped to historic highs, and the Turkish lira plunged in value. The crisis also affected companies’ bottom lines, and as a result many people lost their jobs and their livelihoods.

From 1997 to 2001, more than 20 private lenders were seized by the country’s Saving Deposit Insurance Fund.

The rise in the exchange rate increased the cost of imports significantly, especially of intermediate goods, and caused a heavy burden on the private sector’s external debt.

After the coup, investments slowed down and uncertainty was seen in markets, causing a narrowing economy.

The inflation rate fell to single-digit figures in 2004.

Abdurrahman Kaan, the president of the Independent Industrialists and Businessmen’s Association, told Anadolu Agency that the main purpose of all coups — military or civil — is the transfer of resources, wealth, and income.

The coup in 1997 was also directly related to siphoning of funds from banks as well as to the corruption that increased in the following years, he said.

This process has been a major factor leading to the great economic crisis in 2001, he added.

He said the uncertainty caused by the political instability also increased the public imbalance, noting that the rise in interest rates destabilized the growth on the one hand, and on the other hand prevented the resources from turning into investments, and caused the development of the rent economy.

Orhan Aydin, the chairman of the Anatolian Lions Businessmen Association noted that targeting continuously the elected government, the postmodern coup of human rights has shaken the international credibility of Turkey.

This resulted in a fall in direct foreign investment in Turkey, he said, adding that the country had paid a heavy price of the postmodern coup.

Yasar Dogan, the chairman of All Industrialists’ and Businessmen’s Association, noted that the economy had suffered greatly due to the process that created uncertainties for the future.

Speaking of the damage caused by the coup to the economy, Dogan said one of the main damages was the rise in the fragility of the economy that hit badly the psychology of the business world.

*Writing and contributions by Gokhan Ergocun and Aysu Bicer in Ankara

Erdogan: 2021 to be year of reforms for Turkey