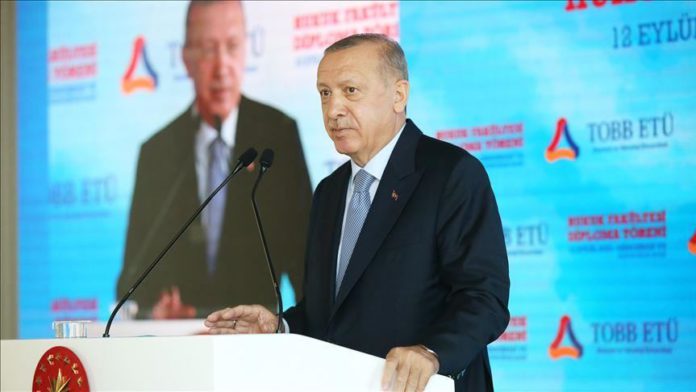 Turkish president Recep Tayyip Erdogan on Saturday said a coup on Sept. 12, 1980 is “inscribed in the minds of our people as one of the darkest days of our political history.”

Erdogan was speaking at the graduation ceremony of the Faculty of Law of the Union of Chambers and Commodity Exchanges (TOBB) Economy and Technology University (ETU) in the Democracy and Freedom Island.

“This coup d’état, which brought Turkey to the verge of major destruction in economic, political, diplomatic and legal areas, cost our country decades,” the president said, referring to the 1980 coup in the country.

Speaking of the 2016 defeated coup in Turkey, Erdogan said: “With the July 15 saga, we gave a lesson that the tutelage enthusiasts will never forget.”

Drawing attention to the reforms undertaken in Turkey over the past 18 years, the President said: “We have been working in every area to consolidate Turkey’s struggle to defend its independence and future.

“With the reforms we have implemented, first and foremost the Presidential System of Government, we have eliminated all the traces of tutelage over our democracy, put an end to prohibitions, expanded the areas of freedoms, and reinforced security and justice.”

Le Mesurier thought of suicide before his death: Wife