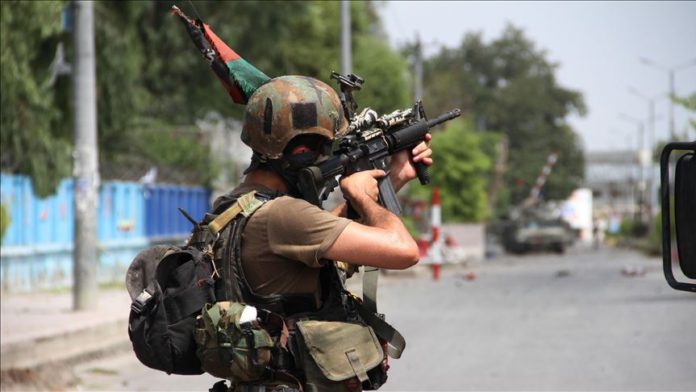 Peace and freedom – two things promised by the US following its invasion of Afghanistan – remain elusive even after 19 years since American boots touched the ground in the war-torn country in 2001.

Afghan Jamal Uddin vividly recalls the evening of Oct. 7, 2001 when he saw Iran’s state broadcaster announcing the US toppling of the hardline Taliban regime in Kabul through a full-blown military intervention dubbed Operation Enduring Freedom (OEF). He was a refugee working on a construction site in Tehran to support his family of nine.

“We were all glued to the television screen in shock as it showed jets dropping bombs on different parts of the country. I had a sense that this war was not getting over anytime soon,” said the 58-year-old, who returned to Afghanistan in 2009 to start a new life under the West-backed regime in Kabul as a vegetable vendor.

Within weeks of the Sept. 11, 2001 terrorist attacks in the US, American boots were on the ground in Afghanistan. Joining forces with the local anti-Taliban Northern Alliance, the US unleashed its military might from the air and on the ground to capture Kabul and later drive the hardline group out of most parts of the country.

“This is nonnegotiable,” then US President George W. Bush said in the early days of OEF when the Taliban called for a negotiated solution to the situation that emerged after the 9/11 attacks and Washington demanded that they hand over Osama bin Laden.

“There’s nothing to negotiate. They’re harboring a terrorist. They need to turn him over,” Bush told journalists.

After two months of intense bombardment and ground offensives across the mountainous country, the German city of Bonn was chosen to host the first International Conference on Afghanistan in December the same year. It delivered an Afghan Interim Authority dominated by the Northern Alliance and headed by Hamid Karzai, who became the first elected president of Afghanistan in 2004 and won a second term in 2009.

Former World Bank economist and anthropologist Mohammad Ashraf Ghani became the second president of the West-backed government of the Islamic Republic of Afghanistan in 2014 and was sworn in for a second five-year term in 2020. But the Kabul government’s control over the mountainous country remained challenged and undermined by the Taliban, despite years of foreign military and financial support.

– Back to talks after long war

On the 19th anniversary of the US invasion, the Taliban reminded the US that it should have pursued dialogue back then to save the many lives and fortunes lost in the war.

“At the time [back in 2001], the American officials arrogantly rejected all overtures of the Islamic Emirate [Taliban] in a dismissive manner and launched a military invasion […] Nineteen years later, all sides are in agreement that had the issue been resolved through dialogue and understanding as advocated by the Islamic Emirate from the very outset, and had the peaceful proposals of the Islamic Emirate been received positively, then we would not have had this long war, brutality and persecution, the murder, injuries and displacement of our innocent people, and the rampant expropriation, plunder, bribery, treachery, obscenity, treason, endemic drug production and hundreds of other evils,” said a Taliban statement issued by the group’s spokesman Zabiullah Mujahid.

Days after the 9/11 attacks in the US, Bush declared in a televised speech that he gave Taliban leaders a series of clear and specific demands: Close terrorist training camps. Hand over leaders of the al-Qaeda network and return all foreign nationals, including American citizens, unjustly detained, which were not met. “And now, the Taliban will pay a price,” he said.

However, the US inked a landmark agreement with the Taliban on Feb. 29 this year for eventual withdrawal of troops from the country. That deal is made of four key points:

1. Guarantees and enforcement mechanisms that will prevent the use of the soil of Afghanistan by any group or individual against the security of the United States and its allies.

2. Guarantees, enforcement mechanisms, and announcement of a timeline for the withdrawal of all foreign forces from Afghanistan.

3. After the announcement of guarantees for a complete withdrawal of foreign forces and a timeline in the presence of international witnesses, and guarantees and the announcement in the presence of international witnesses that the Afghan soil will not be used against the security of the United States and its allies, the Islamic Emirate of Afghanistan which is not recognized by the United States as a state and is known as the Taliban will start intra-Afghan negotiations with Afghan sides.

4. A permanent and comprehensive cease-fire will be an item on the agenda of the intra-Afghan dialogue and negotiations. The participants of intra-Afghan negotiations will discuss the date and modalities of a permanent and comprehensive cease-fire, including joint implementation mechanisms, which will be announced along with the completion and agreement over the future political roadmap of Afghanistan.

The Taliban have welcomed the development and have since been pushing for its implementation in order to pave the way for the withdrawal of all foreign forces.

“The Islamic Emirate is committed to resolving all outstanding issues in a conducive environment and also advises the opposition to make use of this opportunity, to understand the gravity of the situation, to join hands in bringing about an inclusive, independent and sovereign Islamic government that is the yearning of all Afghans and to put an end to all obstructions,” said the insurgent group.

Some of the Taliban leaders emerged in public with a political office in Doha, Qatar in 2013. Since then, the Taliban’s white flag continues to be hoisted over this desert-sand color complex in the Gulf country and the group’s leaders keep engaging in public and secret meetings with foreign powers.

Mawlawi Hibatullah – the longtime head of the Taliban’s “Islamic Courts” – is heading the group. The landmark intra-Afghan talks that began in Doha on Sep. 12 are part of the US-Taliban deal.

There were once more than 100,000 US troops in Afghanistan, but currently less than 10,000 foreign troops are part of the NATO-led Resolute Support training mission.

The Taliban still do not recognize the Kabul government as legitimate representative of the Afghan people.

Afghan President Ghani believes for peace to prevail, the Taliban must realize and acknowledge “the realities of modern Afghanistan.”

“Why are they so afraid of announcing a cease-fire?” Ghani told a conference at Doha forum on the eve of 19th anniversary of the US invasion of Afghanistan. Ghani assured the Taliban they are seen as “a reality of Afghanistan.”

“They must have the courage that the people of Afghanistan would decide their future,” he said, stressing “peace requires a sense of forgiveness.”

Closely monitoring the developments in Afghanistan in the past two decades, defense analyst Gen. Mohammad Katawazi told Anadolu Agency most of the times it has been the US domestic politics and international agenda that run the show in Afghanistan. “The current rush on the part of the Americans is mainly for the forthcoming presidential elections,” he said.

Nineteen years since Operation Enduring Freedom, estimates by the US Special Inspector General suggest more than half of Afghanistan is either controlled or contested by the Taliban insurgents.

Figures by the UN estimate more than 100,000 civilian casualties have been recorded in the past one decade alone here.

“Plenty of money arrived [in Afghanistan with the US invasion], but at a very heavy price,” said Jamal Uddin, a native of the eastern Laghman province, who now owns a decent corner shop in Kabul with his three sons with their own small transport franchise plying on the route between the capital Kabul and eastern border town of Torkham.

“Our economic situation improved, but we cannot travel to our village located two hours’ drive from Kabul due to insecurity,” he said.

Italy-UK team hopes to have COVID-19 vaccine in Sept