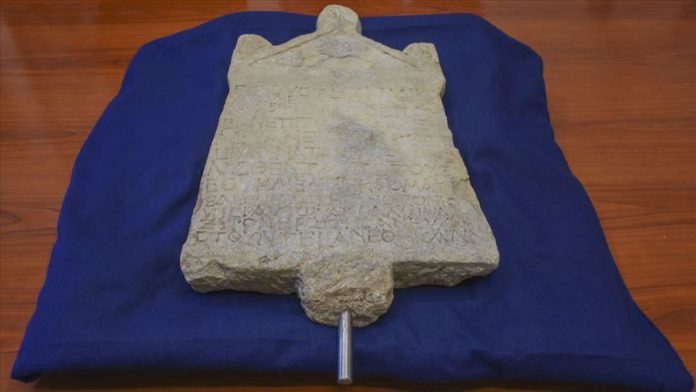 A 1,800-year-old Lydian-era atonement inscription was featured Wednesday in a museum exhibit in Turkey, after it was smuggled from the country and found 23 years ago in Italy.

The inscription was returned to Turkey early on Wednesday and placed in the Museum of Anatolian Civilizations in the capital Ankara.

Culture and Tourism Minister Mehmet Nuri Ersoy said Turkey remained determined to fight against the trafficking of its cultural property during the novel coronavirus pandemic.

“Over the past 18 years, we’ve secured the return of 4,441 historical artifacts to our country. We’ve increased our institutional capacity as of February 2020 for a more effective fight against trafficking in cultural property,” Ersoy said during a ceremony in the capital Ankara.

“Fighting against trafficking cannot succeed only through the efforts of state institutions. All our people should protect our cultural property with the awareness of their civic responsibility, show awareness and support in their protection,” he said.

Caring as much about the return of other countries’ cultural property as it did about its own, Turkey returned has 81 historical artifacts of Iraqi origin as a result of a protocol signed with Baghdad in September 2019, said Ersoy.

It also delivered to Chinese artifacts to Beijing’s envoy in Ankara with a ceremony held at the Museum of Anatolian Civilizations, he added

“We’ll continue our work in this area determinedly. Every historical artifact is beautiful and meaningful in its own homeland, where it belongs.”

The inscription was seized in 1997 during a raid by an Italian anti-smuggling unit at the workplace of an antique merchant.

Italian authorities reported the situation to Turkey on suspicion it might belong to the Lydians, an ancient Anatolian civilization.

Turkey confirmed the inscription was smuggled from the Apollon Aksyros Temple in the ancient city of Saitta in Manisa province, launching a long legal battle for its return in 1998 in which it presented evidence showing that the artifact had been smuggled from Turkey.

But, an Italian court ruled against Turkey in 2012 and Ankara subsequently appealed. The decision was suspended in 2013.

The Florence Court of Appeal ruled on Nov. 5, 2019, that the inscription belonged to Turkey, setting off the return process.

At least 1 dead after partial building collapse in US; many...

Lakers fall to Blazers on tribute night for Kobe Bryant