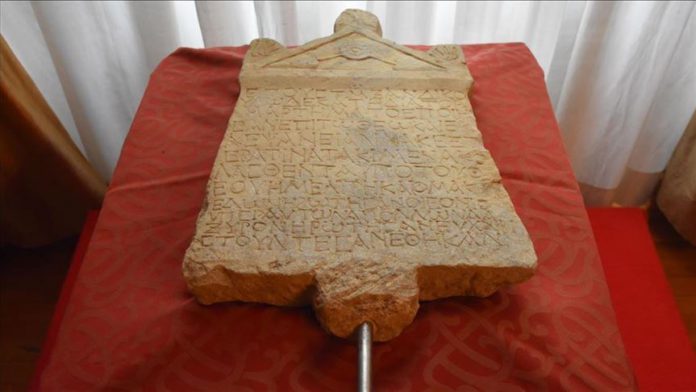 An 1,800-year-old Lydian era atonement inscription was returned early Wednesday to Turkey, where it was smuggled 23 years ago and later found in Italy.

Turkey was reunited with the historical inscription stolen from the ancient city of Saitta in Manisa province in the 1990s due to the efforts of the Culture and Tourism Ministry.

After the inscription was handed over to ministry officials, it was loaded on a Turkish Airlines plane taking off from Rome and was brought to Istanbul Airport.

Preserved in a special box, the historical artifact was unloaded from the plane and was received by Rahmi Asal, head of the Istanbul Archaeology Museums Directorate.

Following its inspection, the inscription was placed in a freight vehicle under the supervision of the authorities.

The historical inscription will be sent to the capital Ankara as it is scheduled to be displayed at the Anatolian Civilizations Museum.

The artifact was seized in 1997 during a raid by an Italian anti-smuggling unit at an antiques merchant’s workplace.

Italian authorities reported the situation to Turkey on suspicion that it might belong to the Lydians, an Anatolian civilization.

Turkey’s Culture and Tourism Ministry confirmed the inscription was smuggled from the Apollon Aksyros Temple in the ancient city of Saitta in Manisa province.

The ministry launched a long legal battle for the return of the inscription in 1998 and presented evidence which showed it was smuggled from Turkey.

But an Italian court ruled against Turkey in 2012 and Ankara appealed. A decision was suspended in 2013.

The Florence Court of Appeals ruled Nov. 5, 2019 that it belongs to Turkey, setting off a return process to the country.

Turkey’s Ambassador to Rome Murat Saim Esenli and an accompanying delegation received the artifact from Claudio Mauti, an Italian officer in charge of the anti-smuggling department, in Florence, Italy on Sept. 19.