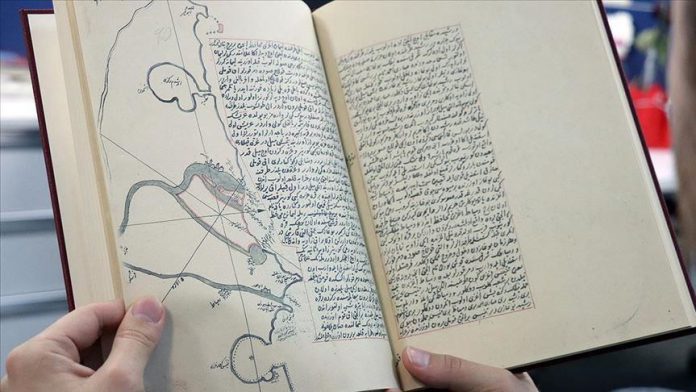 A Turkish publisher reprinted a 17th-century book that sheds light on geographical features of the Mediterranean and Aegean, then-ruled by the Ottoman Empire.

The Navy’s Chosen Ones (Muntehab-i Bahriyye) or the Historical Geography of Mediterranean and Aegean, written by Katib Celebi in 1645-1646, was edited by historian Fikret Saricaoglu at Istanbul University and reprinted by the Turkish Rare Books Library.

“The book tells about the locations of reefs and harbors, people in the region and the castles and towers of that region,” he said.

Saricaoglu underscored that Celebi based his book on The Navy’s Book which was written by Piri Reis, admiral of Ottoman-Egyptian fleet who wrote on the science of navigation. He aimed to update the geographical features first mentioned by Piri Reis by drawing new maps and carrying out some researches.

Saricaoglu said Celebi’s books were also translated into English, including A World Geography (Cihannuma) and a Bibliographical Dictionary (Kashf al-zunun).

Muntehab-i Bahriyye has 93 maps, two scales, geographical definitions, and the names of the places. It also contains the contents of the author’s own pen as well as detailed information about the work.