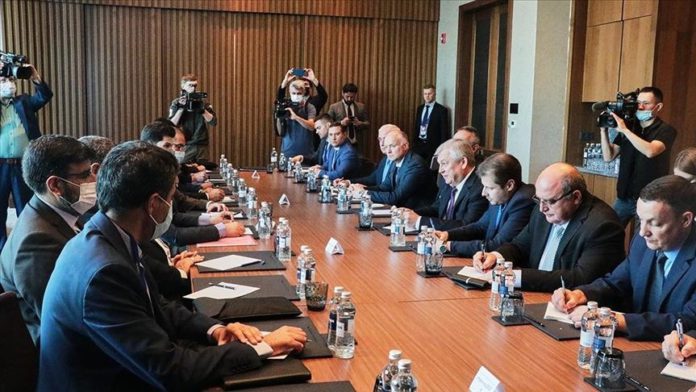 The 16th round of Astana talks on Syria held in Kazakhstan’s capital Nur-Sultan focused on a variety of issues including the humanitarian situation in the country, aid, the political process to end the conflict, work on drafting a new constitution, developments in the northwestern region of Idlib and the fight against terrorism, Turkey’s Foreign Ministry said on Thursday.

According to an official statement by the ministry, the parties participating in the talks — Turkey, Russia, and Iran — underlined that the volume of humanitarian aid to Syria should be increased and called on the international community and UN to action.

Emphasizing the need for a political solution to end the Syrian conflict and reaffirming their commitment to advancing this process, the countries pointed to the importance of holding the sixth round of the Constitutional Committee between representatives of the opposition and regime, as well as of complying with basic principles and rules during committee deliberations, it said.

“Separatist agendas that pose threat to the political unity and territorial integrity of Syria were rejected,” according to the statement on the meeting, during which it added the sides also underlined the “unacceptable nature of illegitimate self-rule initiatives under the pretext of combating terrorism.”

Furthermore, attacks against civilians and civilian facilities were condemned as Turkey reiterated its expectation that the region is rid of terrorism in line with “relevant agreements,” citing an attack last month by the YPG/PKK terror group on a UN-supported hospital in Afrin.

The statement went on to note that the participating countries reaffirmed their commitment to maintaining calm in Idlib and stated that the recent cease-fire violations in the region must be ended as soon as possible.

In addition, a working group established on the release of abducted or forcibly detained people, the exchange of dead bodies, and determining the fate of missing individuals, gathered during the talks.

The parties expressed their satisfaction with the successful exchange of some detained individuals on July 2 and that efforts and collaboration continued.

A statement issued by Kazakh Foreign Ministry late in June said that delegations of Turkey, Russia, and Iran, which serve as guarantor countries in the talks, along with the Syrian government and Syrian armed opposition groups were expected to attend the event, with high-level representatives of the UN, Jordan, Lebanon, and Iraq observing.

Syria has been ravaged by civil war since early 2011 when the Bashar al-Assad regime cracked down on pro-democracy protesters.