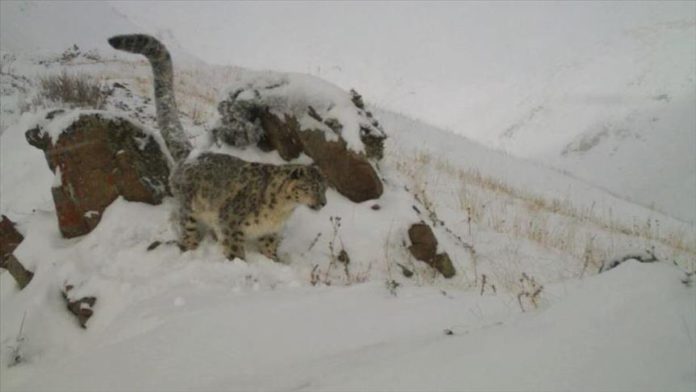 A UN agency on Friday said that its researchers have spotted 15 adult snow leopards in the mountain range overlooking the Kyrgyzstan capital, Bishkek.

The agency fears that their proximity to people and their livestock was not only threatening the endangered cats but also increasing the chances of transfer of zoonotic diseases like COVID-19.

The International Union for Conservation of Nature (IUCN) has listed snow leopard as vulnerable. Their global population is estimated less than 10,000 and is expected to decline further by about 10% by 2040.

The report said some of the snow cats have been photographed as close as 40 kilometers (24 miles) from Bishkek.

“At least two sets of cubs were also sighted, suggesting that snow leopards are breeding close to the city,” the report further said.

Sasykulov Azim Kurmankulovich, a farmer and ranger from Shamshy in the Chuy region in the Ala-Too range, however, expressed apprehension that they may attack livestock for being so close to the city and their prey base has decreased.

The UNEP Europe Office Director Bruno Pozzi said that his agency’s program called Vanishing Treasures is helping people in Kyrgyzstan to diversify their livelihoods through innovative approaches to ecotourism, beekeeping, and horticulture to reduce their dependence on leopard habitats.

Scientific studies suggest that climate change issues will reduce the habitat of snow leopard globally by two thirds by 2070. The UNEP report said that warmer temperatures are forcing farmers to go further uphill to find suitable pastures for their livestock.

“Greater interaction between humans and wildlife may also increase the chances of transfer of zoonotic diseases like COVID-19,” said Pozzi.

He feared that climate change is pushing the elusive cat – known also as the ghost of the mountains – to directly conflict with local communities and their livestock.

“Climate change is hitting the Central Asian mountains. Conflicts between snow leopards and local communities and livestock are likely to become more frequent. This may also result in a possible increase in poaching and illegal wildlife trade,” added Pozzi.

Eurozone is ‘probably past’ worst of coronavirus crisis