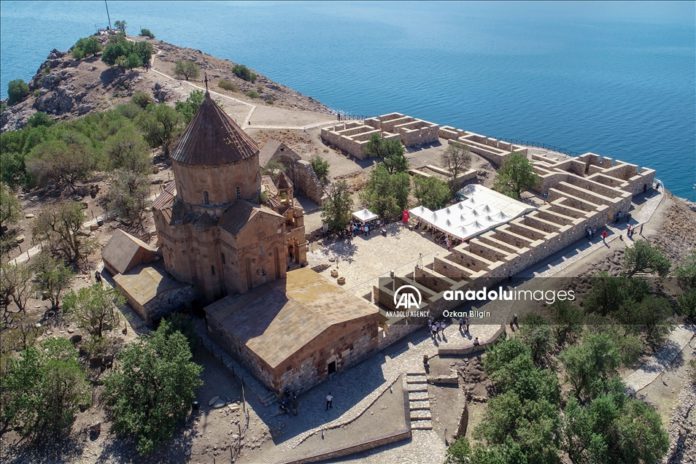 The Akdamar Church, a 1,100-year-old Armenian church in Turkey’s eastern Van province, hosted its ninth special mass on Sunday since reopening in 2010 after a hiatus of 95 years.

Due to the ongoing pandemic, a limited number of people were taken to the island in a boat to attend the ceremony.

High Priest Tatul Anusyan, secretary-general of the Armenian Patriarchate of Turkey and speaker of the Spiritual Committee, came to the island along with his clergy to conduct the ceremony in the church.

The ceremony was attended by 25 clergymen from the patriarchate, who sang hymns and prayed for health and peace.

Speaking after the ceremony, Bilmez said he hoped for the event to be held “with the participation of larger groups in an pandemic-free environment next year.”

For his part, Anusyan said they sent messages of love across the world from Akdamar, which he said is an island of love.

Akdamar Church, a medieval Armenian place of worship, was built between 915-921 A.D. by architect Bishop Manuel under the direction of King Gagik I Artsruni.

The church, which has a special place in East-West Christian art, carries the most important adornments and the most comprehensive wall reliefs of its time and was accepted on the UNESCO Tentative List of World Heritage on April 13, 2015.

On Sept. 19, 2010, the Akdamar Church hosted its first service after a 95-year break. The church opened its service every year for one day and the last service was conducted in 2020, which saw a gathering of thousands of local and international tourists in Van.