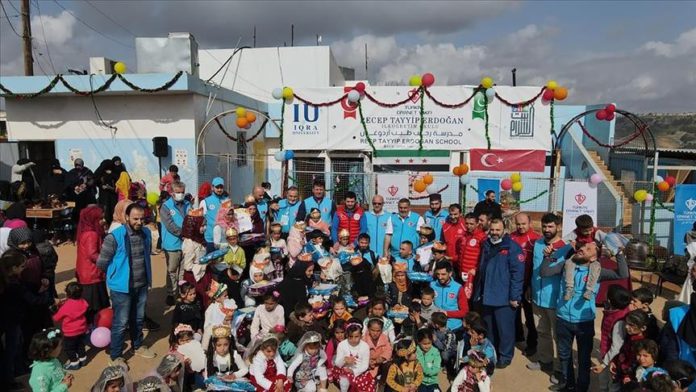 Turkish charities have been helping victims of Syria’s civil war for the last 10 years.

Temelli said that 1,750 houses have been completed so far and delivered to people in need and that the construction of 1,700 more houses is ongoing.

He went on to say that voluntary doctors give weekly health checks and medical support to residents of the camps.

Temelli added that they carry out aid projects in areas of Turkey’s anti-terror operations — Euphrates Shield, Peace Spring and Olive Branch — as well as Idlib.

They also restored the places of worship damaged by terrorists, he said.

“477 mosques in the region were restored and opened for worship,” he went on to say.

Underlining that the association continues humanitarian aid activities in many areas in Syria, Arslan said: “Our aid campaigns continue uninterruptedly in Tal Abyad, Rasulayn, Cobanbey, Afrin and Idlib. In our soup kitchens in Jarabulus, the daily distribution of hot meals to an average of 2,500 to 3,000 people continues.”

He added that they bake 31,000 pieces of hot bread daily in an oven built on an area of 500 square meters in Turkey’s Kilis province, and that they deliver aid to more than 10 million people.

Durmus Aydin, secretary-general of Turkey’s Humanitarian Relief Foundation (IHH), said that they have carried out thousands of projects in areas such as food, housing, education and health since the beginning of the civil war in Syria.

Noting that children suffer the most from wars, Aydin said that they support 18,000 children.

They have delivered 5,000 truckloads of aid to those in need in Syria, he added.

Syria has been embroiled in a civil war since early 2011, when the Bashar al-Assad regime cracked down on pro-democracy protests with unexpected ferocity.

Over the past decade, hundreds of thousands of people have been killed and more than 10 million displaced, according to UN officials.