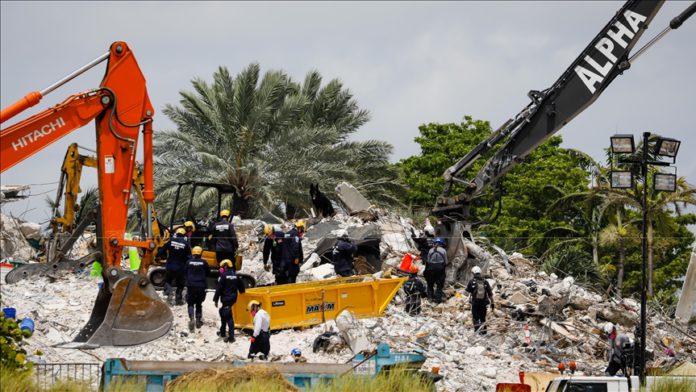 Search teams working in stormy conditions recovered 10 more bodies Wednesday from a collapsed condominium in Surfside, Florida, bringing the number of recovered victims to 46, according to officials.

It is the highest number of victims found in a 24-hour period since the Champlain Towers South building partially collapsed June 24.

Of the bodies recovered, about 30 have been identified, according to ABC News, and more than 100 remain missing.

Fire and rescue teams paused briefly in the last 24 hours under the threat of lightning from Tropical Storm Elsa.

The storm is hugging the western side of the Florida panhandle as it moves north, bringing heavy winds and rain and leaving thousands without power in the Florida Keys.

But the search goes on north of Miami, where teams are using shovels, concrete cutters and buckets to haul away nearly 5 million pounds of debris. Miami-Dade Mayor Daniella Levine Cava said this week that bringing down the half of the building that remained standing, in a controlled demolition late Sunday, was crucial to helping searchers dig through the initial pile.

And although still technically considered a “rescue” mission, officials admit that finding survivors under the pancaked floors of the debris is increasingly unlikely.

Levine Cava told reporters that crews are “looking for bodies and belongings” in a process that is “very thorough and exhaustive.”