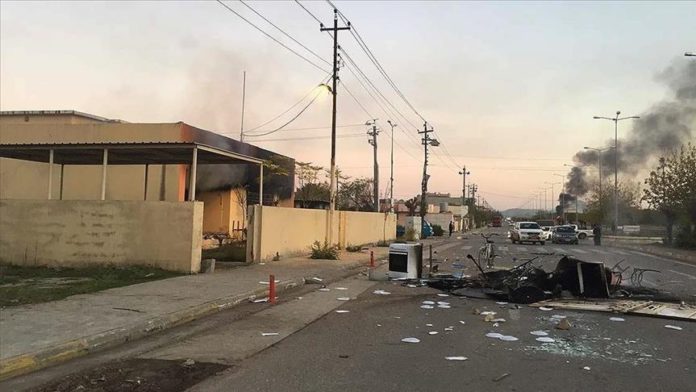 A protester was killed and another critically injured as ongoing protests in northern Iraq over deteriorating economic conditions turned violent, local sources said on Thursday.

Security forces opened fire on demonstrators in Sulaymaniyah’s Kifri district, according to the health director of Germiyan district Sirvan Jamal.

Commenting on recent demonstrations in Sulaymaniyah, Prime Minister of Iraq’s KRG Masrour Barzani implied that PKK elements were involved in the unrest to disrupt stability in the region.

“The demonstrations saw the participation of Syrian citizens and those from outside the Kurdistan Region,” Barzani said, stressing that “a group had infiltrated the demonstrators and changed the direction of the protests and attacked the party and public buildings.”

Since Dec. 7, some nine people were killed and dozens of others injured in the protests against the Kurdish Regional Government (KRG) in Iraq’s Sulaymaniyah and Halabja provinces.

The KRG has been struggling to pay the salaries of civil servants since April when Baghdad stopped paying them as a result of disputes over oil wealth management and the distribution of its revenues, as well as revenues from border crossings.

The number of KRG civil servants is estimated at 1.2 million, receiving total salaries of $700 million per month.